I bought the Windward IV Ceiling Fan from Home Depot to replace the old, slow ceiling fan that came with my house’s master bedroom about 12 years ago. I have been very comfortably blown-away ever since. The old fan, for some reason just never did move much air. The other problem with the old fan was that the remote would receive interference and the light would randomly go off and on in the middle of the night. For that reason it stayed off. Having suffered 12 years of warm, uncomfortable summer nights in the upstairs bedroom, I thought it was finally time to do something about it.

I won’t waste your time explaining how to install the Windward IV fan. There are plenty of good instructions. I put the video below on my laptop and followed it one step at a time. 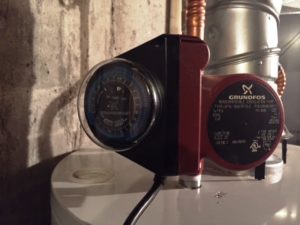 A booster pump or whole house hot water recirculating system is a nonsubmersible pump designed to bring hot water to your kitchen and bathroom faucets without having to run and waste water for several seconds waiting for it to get warm. How well a water circulation pump depends on many factors of your household; size of hot water heater, pipe length, distance of pipes from hot-water heater, and last but not least, temperature and climate. Before I had a Grundfos circulation pump, it required over a minute for the water coming out of my kitchen faucet to get warm first thing in the morning. I was constantly filling pots as the water ran, as to not waste so much water. I had heard about hot water recirculating systems before, so when I had a new hot water heater installed last summer I decided to finally give one a try.

After over 4 years of ownership, I felt it was a good time to provide some updated information on the Kobalt lawn mower. My original and complete review on the Kobalt lawn mower can be found, here. Since I purchased the 40 Volt, 20″ model in 2014, Kobalt has some new 80 Volt Mowers. Meanwhile, my own experience with the 40V Kobalt has been nothing but positive since publishing my original review on April 27, 2014. My lawnmower had continued to offer me flawless, trouble-free performance. I recognize, however, from the feedback below that not everyone has had such a trouble-free experience.  The main source of complaints seems to stem from battery issues.

Some users have reported that the mower stops working for no reason. They remove the battery or place it into the 2nd compartment on the mower and it works fine again for a while. I think I can shed some light on at least half of the issue and that is with the actual batteries, themselves: Since buying the rechargeable mower, I have purchased two other Kobalt products which use the very same batteries: The Kobalt Hedge Trimmer and the Kobalt Leaf Blower.  I now have a total of 5 batteries; 4 of them are the regular, 2Ah, and one is the 4Ah Long Run Battery.  In the past year, one of the 2Ah batteries has begun demonstrating the same symptoms described in the comments below. Whatever device I am using, whether it is the Hedge Trimmer, Leaf blower, or lawn mower will suddenly shut-off for no reason. I can get it to power up again by removing the battery and giving it a hard slam back into the battery compartment. This very same battery also has trouble charging inside the battery charger. Instead of the normal green flashing light, a red light will appear on the battery charger. The other batteries work fine. Since then, I have marked the problematic battery with a red, Sharpie

.  This might not explain everyone’s problem with the Kobalt lawn mower, but it could be a simple solution for some of you who are having power issues. Maybe you simply need Kobalt to replace your battery. Give Kobalt a Call.