In a perfect world, the best tequila for margaritas would be the one that tastes best by itself. Enjoying those kinds of margaritas on a consistent basis, however, is outside most of our budgets. When searching for the best tequila for margaritas, one key is to find the brand that tastes the best at an affordable price. There are other considerations for margarita drinkers.  While we would all agree that smoothness is important, the taste and character of tequila are subjective things that may or may not add to the overall enjoyment of a margarita. It might be that the best sipping tequila in the world has qualities and characteristics that are too bold to make the perfect margarita. It is also likely that the unique taste of world class tequilas is completely lost and unappreciated.  Before I provide my Best Tequila for Margaritas list, I would like to provide some general criteria.

The Best Tequila for Margaritas

I have come up with three categories that I think are important for margarita drinkers:

Even an affordable and good tequila will go to waste in a bad mix. I am not a fan of the overly sweet or sour cook-aid type mixes that most restaurants serve. I use three simple ingredients: 1 part fresh-squeezed lime juice, 2 parts tequila, and a splash of Contreau or Stirrings triple sec.   I like to shake the ingredients vigorously for about 30-40 seconds and serve up (or neat) in a glass with salt around the rim. One thing to beware of is that a bad lime can spoil everything. Good, fresh limes are usually shinier on the outside with bright green color and have a thick skin when they are sliced. Getting a good lime can be tricky, but it is well worth taking the time to find a grocer where they are consistently good. A sour lime will pretty much drown out everything that is good about the drink, including the tequila.

About my Tequila Ratings

I’ve decided to use a few of the familiar tequilas that I’ve tried and rated here on Product Review Ratings. Each tequila is rated in each criteria on a scale of 1 – 10. Of my two favorites, I will warn you that the Rancho Alegre does give me a headache. I didn’t think it would be fair to use that criteria in my ratings since so far, I am the only one I know that complains of this unwelcome phenomenon. I have not done nearly enough research to make this a thorough review, but hopefully these ratings on the best tequila for margaritas will lead you in the right direction.

Rated by Smoothness, Price, and Neutrality

El Ultimo Agave Tequila joins my short list of reviews on excellent tequilas that most of us can afford. I bought the 750ml Reposado El Ultimo Agave Tequila at a local liquor store for around $14.00. This puts it in the same price range of one our favorite marg-making standby’s over the last couple of summers, Olmeca Altos Tequila. The price on Olmeca ranges from $27 – $31.00 at my local liquor stores for a 1.75 liter bottle. Another favorite, which is far cheaper than both of these is, Rancho Alegre. All three of these tequilas are 100% agave. There are a couple of reasons, I prefer the El Ultimo Agave to either of these other bargain-priced tequilas:

Compared straight-up to Olmeca Altos Tequila, both my wife and I preferred El Ultimo De Agave in a blind, taste-test. I was really surprised. Both are smooth tequilas that mix well for margaritas, but the El Ultimo Agave just seems to have more flavor and character.  I noticed hints of honey, fig, banana, butter, orange and ginger. The Olmeca Altos just doesn’t offer as much flavor. For the money, I’d rather pay a little extra for the El Ultimo Agave tequila. Other tequila websites seem to agree with my opinion on El Ultimo Agave. Users and tequila critic snobs alike, have rated it very highly. I did not have the Reposado version of Rancho Alegre, but while I was in the mood, I did do another comparison.

A 1.75 bottle of Rancho Alegre is only around $21.00 and for taste-alone, remains the best deal there is. In another blind taste-test, my wife and I much preferred the cheaper Rancho Alegre over the Olmeca Altos tequila and I suspect it would give the El Ultimo Agave a run for its money if I had the same, two types to compare. However, this is a moot point for me. It has been painfully proven to me time and time again, that Rancho Alegre gives me a headache. My wife doesn’t have this problem, so it could just be me. If you haven’t tried Rancho Alegre, I encourage you to try it. Once the secret gets out on a good, cheap tequila, they become much easier to find, though the price tends to rise accordingly. At any rate, I will continue to try bargain-priced, 100% agave tequilas as I find them. The question is where can you find it?

Here is where things get tricky. El Ultimo Agave Tequila is listed as an uncommon tequila on the UndertheLabel website. I located El Ultimo Agave at Sams Warehouse Liquor in Westminster, Colorado. Though Sams is one of my favorite liquor stores, they are not in the most convenient location for me. Sams had an excellent selection of tequilas and trying a new one for the first time is a difficult choice. It turns out I made the right choice after fondling bottle after bottle of unknown tequila brands. The problem is, I have not been able to find El Ultimo Agave in any of the other liquor stores near my local neighborhood. If you can find El Ultimo Agave tequila at your local liquor store, I highly recommend it. 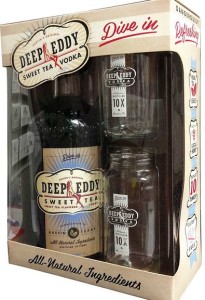 My purchase of a 1.75 Liter of Deep Eddy Vodka at my favorite local liquor store was more of an informed decision than an impulsive one. Lately, I’ve been experimenting with a gluten-free diet. Since some vodkas are made from wheat and other glutenous grains, they are likely to contain some small level of gluten. The dietary advice for those who suffer from Celiac disease is that distilled liquors like Vodka, even though they are made from grains, are probably okay to drink. How is this possible? Apparently, grain-based vodkas lose most of their gluten in the distillation process. There is such small amounts of vodka in grain-based alcohols that most celiac health experts believe it is harmless for persons who suffer from Celiac disease. Unfortunately, not all sufferers of celiac disease are the same. Even a microscopic amount of gluten for my niece could have catastrophic consequences. For me, just about any type of alcohol probably doesn’t pose much of a threat, but I decided to go as gluten-free as possible. Deep Eddy Vodka is 100% certified gluten-free. The box boasts the claim that Deep Eddy is distilled 10 times and 100% natural. But, the absence of gluten was only one reason to buy Deep Eddy. How about the taste of the vodka?

Deep Eddy is a Bargain

The price I paid for a 1.75 Liter of Deep Eddy was $19.99. Granted, my local liquor store is full of great deals, but Deep Eddy would still be a bargain at any store. Like many other American vodkas, Deep Eddy is made in Austin, Texas and is 80% / 40-Proof alcohol and distilled from potatoes. The bottle I bought came came with one other perk: It was packaged in a nicely boxed gift-set which included two logo’d glass jars with the Deep Eddy logo. Those big jars, suggest, that one might use their vodka to make those big fruity  foo-foo drinks with lime and/or lemonade.  If you’ve read my numerous other vodka reviews, you realize that I would have preferred a couple of martini glasses since that is the way I normally drink vodka. That’s okay, I have plenty of martini glasses and the Deep Eddy jars make a nice addition to our assortment of bar glasses.  Deep Eddy was mainly purchased to replace my empty favorite bottle of Blue Ice Vodka which was also made from potatoes and certified gluten-free. Blue Ice has been the standard by which I judge all other vodkas. This one, however, was a few bucks cheaper. Could Deep Eddy be as good?

Deep Eddy proves once again that you don’t have to pay good money for good vodka. I’ve paid more for other brands that aren’t as good. Belvedere and Grey Goose immediately come to mind. I poured the first taste into my glass and tried it at room temperature. The initial taste was so smooth and light that I thought I had accidentally mixed water into my vodka. The finish went down like vanilla sugar water. I dried out the glass and tried it again and got the exact same outstanding result.  Deep Eddy is very clean, sterile, and somewhat of a sweet vodka. It might be a little too sweet for me to say it is my favorite over Blue Ice, but I would certainly buy it again at the great price of $20.00.  If you’re a vodka enthusiast that likes ethanol taste that is so prevalent in many other vodkas like say, Sobieski, Deep Eddy might not be the best choice for you. I think the ethanol gives it an illusion of air, lightness and carbonation that some people like. To me, it tastes like the inside of a rubber balloon. I never did care for that flavor. I can overlook the sweetness especially when olives are added.  I mixed my first martini with Deep Eddy by vigorously shaking it inside a stainless steel shaker of ice and adding  two Mezzetta olives to the glass.  When my wife saw the interesting box on the counter, she too, decided she wanted to try a vodka drink rather than her usual Rob Roy. I made her a martini with ice and lime juice, which is very appropriate for a hot summer evening. The power of suggestion is just one of the strengths of this brand. The main strength is its taste and Deep Eddy Vodka makes one of the best martinis I’ve had since, well, the last drop of the Blue Ice left my house.