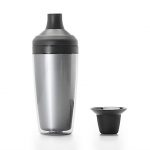 Monkey Shoulder scotch is a blended scotch of three, different, Speyside Single Malts: Glenfiddich, Balvenie, and Kininivie. The story on the back of the bottle provides an interesting story as to how Monkey Shoulder Scotch got its unusual name which is derived from the malt men who doing the shoulder-wrenching job of constantly turning the malted barley by hand to make small batches of delicious whiskey. I will boldly say that this scotch is deserving of this name for a much more important reason: That is, you will throw your shoulder out from the thousands of times you will be lifting the glass up to your lips to consume this delicious, liquid gold. Monkey Shoulder scotch is one of the best blended scotches I’ve ever had. It is actually similar to a Speyside Single Malt

like Glenlivet, but it is even better than that.

Before I get to the four mentioned bourbon whiskey brands, I would like to explain how I got here. All bourbon is whiskey, but not all whiskey is bourbon. This is important because distilleries in Colorado seem to be popping up everywhere. Most of what I’ve had in Colorado is not bourbon whiskey brands. In the past year, I’ve visited Leopold Bros and Stranahan here in Colorado. I became curious what the buzz was all about. The whiskey I tasted at the two aforementioned places didn’t seem all that special to me and are horrendously expensive compared to smooth, refined Kentucky bourbon. Of course, the big difference is that I was comparing these whiskies to bourbon which they are not. When it comes to smoothness and immediate enjoyment, bourbon seems to give a higher bang-for-the-buck. So, I wanted to explore a little bit with actual Colorado bourbon just to see how it compares to other bourbons in the same price range. This is no easy task but as I just mentioned, Colorado whiskey is expensive! In the process, I became curious about some of these other types of whiskey. I did some research on Proof66.com which is an excellent primer for learning about the different types of whiskey. I will not bore you with the education on what makes it what it is because they can do that much better than me. Besides bourbon, there is blended whiskey, single malt whiskey, Irish whisky, rye whiskey, and single malt scotch whisky just to name a few. So, I picked up a bottle or two from three of these categories in this past month.  I will get to these other types of whiskies later. For now, I would like to compare and review a few of the bourbons that I’ve tried most recently. These are my own bourbon reviews. You can rate each of them, yourself, at the end of the article.