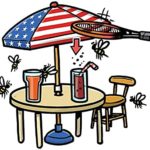 I have bought two other electric fly swatters. Each of them worked okay, but had their share of problems. One of them, for instance, was constantly sparking before it touched anything which would scare the flying insects away before I had a chance to execute them. The other one seemed to daze the bugs without actually killing them. The Executioner is the best one I’ve owned, hands-down. It is quiet and gives a sufficient enough zap to kill even the nastiest things like large hornets. Before we go out and buy one, let’s explore the often asked question of whether or not electric fly swatters are safe.

I remember when Bug Zappers came out back in the 1980s. We sat on our back patios, sipping cocktails and beer, while we listened to mosquitoes fry by the thousands. None of us ever worried it was cruel. The sounds of these harmful pests crisping in the still of the dark night was music to our ears. Consider the filth and germs carried by flies. Consider the danger presented to us by hornets. No, it is not cruel to use an electric fly swatter.