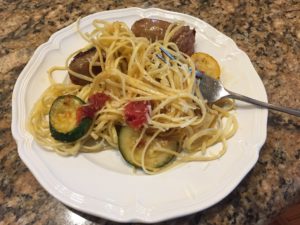 What is the best store bought pasta? Barilla Linguine Fini is the best store bought, egg-free pasta, hands-down. Really, the best pasta should be made with eggs, but it is hard to find that these days and some of them are just not as good as they used to be. When I was a kid we always bought a brand called, RF Egg Vermicelli. Unfortunately, the stupid and phony cholesterol scare caused pasta makers to stop using eggs. Nobody would buy it because they were mistakenly conned into thinking consuming eggs would raise your cholesterol and harm your heart health. So, pasta makers stopped using eggs and the pasta has never been as good ever since. But, that’s another topic. Back to rating the best store bought pasta. A good pasta should be springy, bouncy, and full of life. I love watching the television show, Lydia’s kitchen. Lydia has demonstrated on TV more than once what a good pasta looks like. Nobody wants limp or soggy spaghetti. Lydia has even specifically described and demonstrated how pasta needs to have a spring and bounce to it when you twirl it with your fork.  I am not sure what brand of pasta Lydia actually uses, but as far as I am concerned she is the best Italian chef on TV. I’ve learned many things from her and her cooking reminds me of my Italian grandmother.

Before I tried the Barilla Linguine Fini

my favorite pasta had always been De Cecco

.  The great thing about De Cecco is that it doesn’t matter what shape or size you buy. It always has that ‘bounce’ and ‘spring’ just about like a good egg pasta. Besides De Cecco, I’ve never been thrilled with anything other than the linguine by Barilla. Barilla’s other shapes and sizes of pasta are just so-so, but De Cecco always comes off the stove with that same spring and bounce no matter what variety or shape you buy. So, why not keep buying De Cecco?  Easy answer. It is about 3-times the price of Barilla. I think I paid $1.50 for the Fini. The regular-sized Barilla Linguine has always been decent, but I don’t want pasta that size and thickness for every type of dish. The Barilla Linguine Fini is the perfect compromise. It is slightly square and flat, but not as large as the linguine and it cooks to a Al Dente perfection in about 7-8 minutes.  I like to make the pasta Al Dente enough that I can finish it off with an oil or sauce without over cooking it.

How to Serve the Best Store Bought Pasta

I fried some Italian Sausage in a pan while I got some water boiling. While the sausage was cooking I crushed some fresh garlic, then placed linguine fini in the pot. After about 7-8 minutes I removed the pasta from the stove and strained it through a colander. Using the hot pot that the pasta boiled in I poured in light olive oil and the crushed garlic. As soon as the garlic began to brown I put the pasta in the pan, tossed it with some salt, pepper and Romano/Parmesan cheese. For an egg-free, best store bought pasta, it doesn’t get any better than Linguine Fini by Barilla.