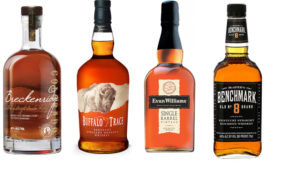 Before I get to the four mentioned bourbon whiskey brands, I would like to explain how I got here. All bourbon is whiskey, but not all whiskey is bourbon. This is important because distilleries in Colorado seem to be popping up everywhere. Most of what I’ve had in Colorado is not bourbon whiskey brands. In the past year, I’ve visited Leopold Bros and Stranahan here in Colorado. I became curious what the buzz was all about. The whiskey I tasted at the two aforementioned places didn’t seem all that special to me and are horrendously expensive compared to smooth, refined Kentucky bourbon. Of course, the big difference is that I was comparing these whiskies to bourbon which they are not. When it comes to smoothness and immediate enjoyment, bourbon seems to give a higher bang-for-the-buck. So, I wanted to explore a little bit with actual Colorado bourbon just to see how it compares to other bourbons in the same price range. This is no easy task but as I just mentioned, Colorado whiskey is expensive! In the process, I became curious about some of these other types of whiskey. I did some research on Proof66.com which is an excellent primer for learning about the different types of whiskey. I will not bore you with the education on what makes it what it is because they can do that much better than me. Besides bourbon, there is blended whiskey, single malt whiskey, Irish whisky, rye whiskey, and single malt scotch whisky just to name a few. So, I picked up a bottle or two from three of these categories in this past month.  I will get to these other types of whiskies later. For now, I would like to compare and review a few of the bourbons that I’ve tried most recently. These are my own bourbon reviews. You can rate each of them, yourself, at the end of the article.

If you’ve tried any of these bourbons below, please give us your own rating.

I picked up a bottle of Breckenridge bourbon for $31.00 which seemed cheap to me based on my past experience with whiskey price tags from Colorado.  I am aware that there are great bourbons from Kentucky and Tennessee for a great deal less money, but will get to them later. I uncorked the bottle, poured a shot in my glass. The 86 proof alcohol was a bit strong on the nose before I began appreciating the vanilla and buttery-smooth anticipation. My first sip immediately convinced me that a great bourbon can be made outside of the bourbon belt. My taste buds were greeted with vanilla, pecan, caramel, and brown sugar. Just about as good as anything I have tried in a while, including a sample of the Single Barrel I recently had at the George Dickel distillery in Tennessee. Fortunately, I had something else on hand to compare it with. This is probably my favorite of the four bourbon whiskey brands, but that doesn’t mean it is the best one to buy as you’ll soon see.

A blind taste of whiskey snobs from three different wine and spirits publications choose Buffalo Trace bourbon over just about any bourbon made, including ones that cost hundreds of dollars more. Yes, it is even rated higher than the company’s own, Pappy Van Winkle. Of course, these more expensive whiskies are chosen by collectors and aficionados who are looking for new and different tastes.  For a clean basic bourbon under $25.00, Buffalo Trace is the highest rated whiskey you can buy. This one is very similar to the Breckenridge. To me, the Buffalo Trace tastes a little darker and I noticed a bit of a candy-green-apple aroma and taste. There seems to a bit more pecan and brown sugar, but a little less vanilla.  Both bourbons finish very smoothly. I had a very difficult time deciding which one I preferred and even put my wife to the test. I didn’t tell her which was which. After a great deal of going back and forth, she decided she preferred the Breckenridge ever so slightly. I still haven’t made up my mind, but I would not pay $10.00 more for the Breckenridge as my every day drinking bourbon.  Since I made my first purchase of these two. Applejacks, a large popular liquor reseller in Wheat Ridge, Colorado sells the Buffalo Trace and Breckenridge Bourbon for $19.99 and $29.99, respectively.  For good measure, I decided to try one more reasonably rated bourbon.

The Evan Williams Single Barrel Bourbon  finished a respectable 3rd in my opinion, behind Breckenridge and Buffalo Trace. There is less vanilla on the nose and front, and a little more bite. I notice the same characteristics as I do in the other two of brown sugar and pecan, but with not quite as smooth and long lasting a finish. The Evan Williams tastes a little heavier to me. Some bourbon drinkers might actually prefer this among the other bourbon whiskey brands. For my tastes, it is certainly a good bourbon, but at $26.00 there would be no reason to choose it over the Buffalo Trace. These three are excellent choices for sipping bourbons, but could I find something almost as good that is even more affordable for use in daily cocktails favorites such as Manhattans or Old Fashions?

I previously thought that nothing could beat the 1.75 liter bottle of Ezra Brooks that I had been buying for making mixed drinks. That is, until I did some research on my favorite, Proof66.com website and discovered Benchmark Old No. 8. Benchmark Old No. 8 bourbon is made by, Buffalo Trace. Not all bourbon whiskey brands are the same, but not all of them have to be so expensive either. What’s so good about Benchmark 8? Well, it’s cheap. Not only did I pay just $11.00 for a bottle, but the bottle is a 1L instead of a 750ml, meaning I got 25% more for the low price! From the reviews I read of users and experts alike, there is no better ‘cheap’ bourbon. It’s kind of a shame, however, to refer to this as a cheap bourbon.  Benchmark 8, in fact, is better than bourbons that cost 2 or 3 times more such as Jim Beam.  My taste buds agree with both the experts and other typical users. This is a quality liquor cleverly marketed by the Buffalo Trace distillery. Rather than simply making an inferior, cheap bourbon, they have made this one differentiated this by making it with a stronger rye vs corn ratio. While Buffalo Trace is made from 90% corn / 10% rye, Benchmark 8 has a much higher rye percentage. To me, rye whiskies taste a little sweeter. The Benchmark 8 is sweeter on the taste, but perhaps a little less heavy on some of the characteristics that bourbon drinkers love. Having tasted this, I wouldn’t hesitate to use it for a Manhattan or an Old Fashioned.

Conclusion, for me, the difference between Buffalo Trace and Breckenridge bourbons is too close to call. For that reason, is there really any reason to pay 30% more? Reputable bourbon brands are offer a very consistent quality. Once you get beyond a certain quality it comes down to personal taste or perhaps which bourbon whiskey brands mix best with your favorite cocktail.

How to make the Best Manhattan

Using your favorite bourbon is only half of what it takes to make a really good Manhattan, Old Fashioned, or other cocktail. A good drink is only as good as the worst ingredient used. A good bar will never use the bright red maraschino cherries you see at the grocery store. Unfortunately, some of the best brands like Luxardo are not cheap. You will have to pay a premium to do it right, but there is a great compromise. Try the Maker’s Mark or Bada Bing cherries. You can find them at Amazon below.