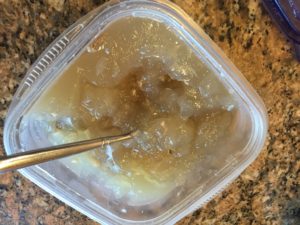 A bone broth recipe is an ancient remedy for healing and promoting our immune system. When I was a kid I remember taking a cooled, leftover bowl of chicken soup out of the refrigerator and noticing that the broth looked like gold jello. I later learned that this gelatin-type substance is the key to what makes it so healthy. The gelatin, which is packed full of vitamins, minerals, and nutrients is what is extracted from the bones that have cooked in the broth all day. At room temperature or above, these vitamins and minerals inconspicuously  blend in with the liquid broth. When the broth is cooled at refrigerator temperatures, assuming it has been cooked long enough, it settles into a gel. The gelatin is evidence that the bone broth was successfully cooked. The health benefits of
bone broth

are numerous and because it is in a natural liquid form, the body absorbs them much better than over-the-counter supplements which are expensive and hard to digest. One of the very expensive supplements that bone broth can replace is Glucosamine and Chondroitin which are good for our joints and arthritis. The collagen in broth is also supposedly very good for our digestive health and immune system. But, despite all of its benefits, it tastes fabulous, and who doesn’t like a great-tasting bowl of soup? There is only one thing that might prevent any of us from eating this delicious, healthy, liquid-gold on a daily basis: Time. Most recipes for chicken bone broth require 18-20 hours of slow cooking. Beef bones can take much longer than this due to their higher density. This is one of the primary reasons I decided to buy a pressure cooker.

The beauty of a pressure cooker is that you can reduce the cooking time of literally any food by several hours while still maintaining all of its nutrients.
Because the pressure cooker is completely sealed, the vitamins and minerals are not going to escape the pot in which they are cooked. Because it is broth we are cooking, all of these healthy ingredients are simply absorbed back into the liquid. I made my first batch of beef bone broth in about 3 hours. Here are the ingredients I used and the recipe I used:

What makes a bone broth pressure cooker is simply how it is used. Most pressure cookers have a brown and sear feature. I coated the bottom of the pot with olive oil and the garlic cloves and began frying the Oxtail and beef rib bones until they were brown on all sides. Next, I added the liquids. If there is one drawback to the pressure cooker method, it is that the pot can be no more than 2/3rd full. You won’t be able to make as much in one batch as you would with one of those huge, metal soup pots like your grandma used to use. On the other hand, you can make 5 or 6 batches in the 24 hours time that it would take to make a really healthy broth. Also, you can add more water as you go as I’ll explain. I closed the lid on the pressure cooker and chose the Soup Setting and set the timer for 1 hour and 40 minutes. After the time had expired I released the pressure valve using a couple of cooking gloves. At once the kitchen was filled with the delicious aroma of homemade soup. I carefully opened the lid of the pressure cooker and let the ingredients cool. (This can take an hour or more). Once cooked, I removed the bones and picked off the meat and put them into another bowl which I later used for beef stew. Cooling the bones and reheating them helps extract the gelatin. I learned this from a Vietnamese recipe for making Pho. Once the meat was removed and I placed the bones back inside the pressure cooker pot, I noticed that I had room for more liquid, so I added water until it was once again 2/3rds full. I replaced the pressure cooker lid, closed the relief valve and turned and repeated the same cooking process for another 60 minutes. This time after the bone broth had cooked, I helped it cool by adding a few ice cubes and then left it in the refrigerator overnight. When I removed the bone broth from the refrigerator the next morning I was greeted to a half-inch layer of solid beef fat. Beef fat might scare some people, but I consider it a great one of the great, additional benefits of making bone broth. Beef tallow is a healthy and tasty way to fry foods. I skimmed off the fat and stored it in a separate container to keep in fridge.  As you can see from the actual photograph, the bone broth worked. Its texture, when cooled in the refrigerator, is 100% gelatin from top to bottom. Here is how I used it all.

I reheated the bone broth so it would be easier to pour. I stored it all in one jar and four, resealable plastic containers. Two of these I put in the freezer. The bone broth can be heated up and drank right out of a coffee cup. Also, you can add rice and vegetable to the broth and eat it as you would soup. The next day, I used a half jar of the bone broth recipe and added it to the beef from the bone, along with chopped carrots, celery, and onions to make a stew. I added an additional pound of stew meat, seared it, and cooked it all in the pressure cooker in about 30 minutes. It is the best stew I’ve ever had. The bone broth recipe, alone, is very tasty and convenient to drink or eat every day, but it has some other, fabulous benefits such as beef tallow and an excellent soup or stew starter. 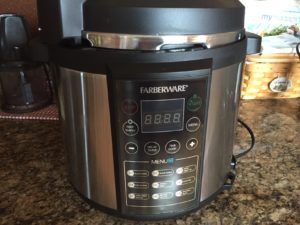 The Farbeware Pressure Cooker pictured here, is the bad-boy I am using as a bone broth pressure cooker among many other uses. For instance, bone broth, stew, and other foods that can be cooked to cheat father time. I chose the Farberware 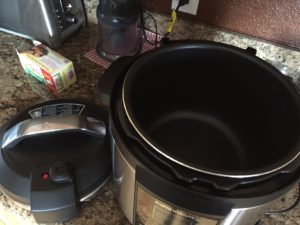 because it had the best price ($59.00 at Walmart), yet was still rated very highly by users, overall. Both, the bone broth and stew, are the first two recipes I’ve ever made with the Farberware pressure cooker. I won’t go into great detail explaining how the pressure cooker works. What I will say is that I didn’t have to read a whole lot of instructions to know how to use this as a bone broth pressure cooker. In fact, the instruction manual is so bad that I pretty much had to learn how to get started from a couple of Google searches and YouTube videos. I believe all brands of electric pressure cookers are basically the same and virtually all of them can be used as a bone broth pressure cooker. The Farberware has 9 Settings: Slow Cook, Soup/Stew (This is what I used for the bone broth recipe), Rice/Risotto, Fish Steam, Steak/Meat (Used this for the Stew), Chicken, Vegetable Steam, Beans/Lentils, and Brown/Sear. Each setting allows you to adjust the cooking time by pressing the + or – buttons. Also, once your cooking time has expired, the Farberware pressure cooker

automatically defaults to the ‘Keep Warm’ setting. Getting the pressure cooker started is a matter of locking the lid in place and setting the pressure relief valve to the sealed position. You select your cooking method and time, press start, then wait. In the case of the bone broth recipe, you’ll be doing a whole lot less waiting than your grandmother or the ancient Chinese soup masters. I am currently using the Farberware as 50% bone broth pressure cooker and 50% for other things such as stews, soups, chili’s, meats, etc., etc.