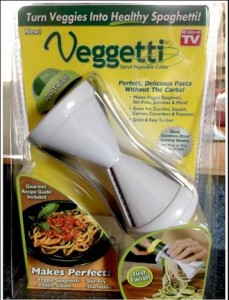 I never dreamed that veggie pasta would become one of my most desired food staples on the dinner table. The Veggetti will turn just about any reasonably sized squash or zucchini into a pasta dish in a couple of minutes or less. We’ve all probably seen spaghetti squash dishes used as pasta substitutes in the past. The Veggetti, though, which uses the narrower zucchini gives you a better taste and two different sized textures of vegetable pasta.  Unlike squash, the flavor won’t over-power your sauce, and the texture is just as firm as your favorite brand of al dente spaghetti. Some of you are probably asking why anyone would prefer veggie spaghetti over good ol’ regular pasta.

How do you rate the Veggetti? Leave Your Review Below

The answer is, carbs and gluten. Doctors and nutritionists are proving that our food pyramid has been deliberately and wrongly turned upside down for the last several years. Our bodies were meant to eat a diet with less carbs and richer in saturated fats and cholesterol. Books and blogs such as Wheat Belly and Grain Brain are changing the way we view carbohydrates in our diets. Furthermore, a higher number of people seem to be suffering from wheat or gluten intolerance these days, and Celiac disease is on the rise. Why wheat has suddenly become suspect in all of this is still

being debated. It could be that our bodies were never designed for grains, or it could have something to do with the way wheat and grains have been genetically modified. It is not the intention of my article to elaborate on this topic; there are plenty of other websites and books that go into that. One thing I do know for sure is that I have never enjoyed packaged spaghetti pasta as much as I used to since they started removing the eggs due to the phony cholesterol fear. My mother always had our favorite brand in the cupboards: R&F Egg Vermicelli. The eggs gave the pasta texture which as I will explain, is the most important characteristic of pasta.

Have you ever sampled a strand of semolina spaghetti boiling in a pot of water and thought about its flavor? Chances are, you don’t even notice the taste. Pasta or spaghetti isn’t about flavor, it’s about texture, right? The purpose of testing the pasta is to make sure you don’t overcook it or undercook it. We want the texture semi-firm (al dente), yet not crunchy. Consider what it is like to put tomato sauce and meatballs over a plate of over-cooked, soggy pasta. You end up with a plate full of orange mush. The flavor isn’t changed much, but the pasta isn’t nearly as satisfying to eat because you’ve lost the texture. I would go so far as to say this same concept applies to white rice. Why do we eat white rice with so many of our meals? Because the rice is a filler, it adds texture and a means of sauces and flavors of the meats and oils. I would argue that even plain white rice has more flavor than an plain, wheat flour pasta. While good texture is desirable, we don’t want to overpower the flavor of the dish with a pasta that tastes too strong. The beauty of the Veggetti is that it utilizes the most perfect fruit or vegetable for the task: zucchini.

When my wife first brought home the Veggetti, I said sarcastically to myself, “oh, great, that means we no longer get to enjoy good pasta dishes.” My uninformed claim and concerns were based on my idea that the veggie strands, no matter how good they looked and felt, would over-power the flavor of the sauce and meats. I normally don’t like mixing vegetables; I prefer to eat them separately so they don’t interfere with the taste of the main course. I spoke too soon and was in for a very pleasant surprise. The veggie pasta not only had superior texture, but a very pleasant, mild taste. The appearance, texture and taste of veggie pasta were superior to traditional spaghetti in every way. One of the things that surprised me most about the veggie spaghetti was the golden color which gave it the appearance of an egg-rich, homemade pasta.  As you can see from the photos of the finished homemade spaghetti dish, the veggie pasta is the perfect texture for holding up under a plate of red sauce and Italian sausage. The veggie spaghetti twirls together nicely with a fork full of sauce and tastes delicious.

How to use the Veggetti 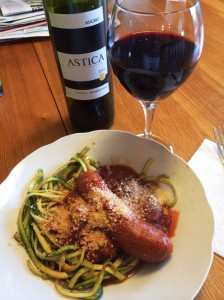 The Veggetti has two sides: One side is for making thin and the other side is for making thick, veggie pasta noodles. Simply insert the zucchini and turn clockwise. One other advantage to veggie pasta is that it takes very little time to make. You can turn a couple of full zucchini’s into a pasta dish in less than 2 minutes. The thick noodles are very similar to some of the home-made egg noodles I’ve had with a slightly square-shaped diameter. The secret to making the successful dish is to cook the veggies very little if at all. The thicker noodles can be flash-fried in a large pan of olive oil with garlic, onion, carrots or anything else you’d like to add. Doesn’t this sound like a much tastier and healthier way to enjoy homemade spaghetti? We plan on using our Veggetti to make oil and seafood veggie pastas as well as stir-fry dishes. The veggie noodles would be a great way to make your own lomein stir-fried with beef, chicken or shrimp.

You can buy the Veggetti just about anywhere for only $15.00. This tremendous, kitchen tool has already paid for itself in the two weeks that we’ve had it. Remarkably, I have learned some things about pasta and food that I never knew. Taste only accounts for one part of the meal. Texture, appearance and color play a significant role in making a delicious meal. The Veggetti will certainly add appealing color and texture to your meal without the unnecessary carbs.

How do you rate the Veggetti?