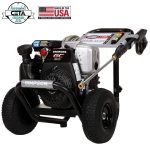 It could just be my experience with the very poor quality, Task Force Pressure Washer, but my impression remains that gas-powered pressure washers are made of a much more durable quality than the electric ones.  I have now owned the Costco Simpson Gas Powered Pressure Washer

for exactly four years and it is still running fine. I did have to place a couple of o-rings, but unlike the Task Force, the structure is modular and non proprietary and parts replacement is cheap. I’ve found this pressure washer to be a little finicky when it comes to getting it started after long periods of not being used. Other than that, this unit is 10-times better than the ridiculously poor-quality Task Force.

Leave Your Review BelowIn three years, I went from the failed Task Force Electric Pressure Washer to the Costco Simpson Pressure Washer with a Honda Engine. I’ve been without a pressure washer for two years thanks to the extremely poor quality of the Task Force. The Task Force worked good enough the first couple of times to make me realize how valuable it is to own a pressure washer. Just make sure you get one that lasts. The negative reviews on the Task Force speak for themselves. Don’t get a Task Force Pressure Washer. So far, the difference is like night and day. It’s important to note a couple of things: For one, the Honda Gas-Powered pressure washer you see at Costco has a Honda engine, but is not entirely made by Honda. While Honda has a great reputation for building quality products, we need to keep in mind that they cannot control everything that has their name on it.They build the engines for lawn mowers, power washers and other kinds of equipment. Before we get to the review, I need to answer the all important question that comes up with Electric Pressure Washers vs. Gas Powered Pressure Washers.

Which is better: Gas Powered or Electric Power Washers?

Now, that I’ve had and tried them both, I think the gas-powered pressure washer gets a sizable edge for convenience. While there are certainly some convenience issues with buying gas and starting them up, gas powered pressure washers are far easier to maneuver while you use them. Pulling out an extension cord and rolling them around, makes electric pressure washers an outright nuisance. With a gas powered power washer, you only have to be concerned about the water hose and not an additional electrical cord. Once you get them started, they are far more portable and handy to use. And, when it comes right down to it, the electric pressure washers are not really much quieter. While, they don’t have a gas-powered engine, they still do have a motor that makes a lot of noise. So, with that said, how does the $300 Honda Power Washer perform and operate?

Sizing up the Pressure Washer

Costco often offers pretty good bang-for-the-buck when it comes to household appliances. Honda makes the engine and Simpson makes the pressure washer mechanics. The Honda-Simpson power washer is build with Honda’s 187cc, 4-stroke overhead Cam engine and comes with a 2-year limited warranty. When it comes to Honda, there are no worries, but what about the rest of the machine? Simpson’s power washer is built like a German tank compared to the Task Force. At 3,000 PSI, there is plenty of power. The nozzle pieces are made from brass rather than plastic and are a breeze to switch out. Overall, the operation makes the difference.

The Honda pressure washer engine uses straight, unleaded gas. I was worried that I might have difficulty starting up the engine on my first try – and sure enough, it took several pulls to get the Honda engine started. I instantly loved the smooth operation of the pressure washer body. The included 30′ hose gives me plenty of room to wash all sides of a car without having to move the actual machine. On the occasion when I did have to move the machine, it rolled very easily and unlike the Task Force, never tipped over. Changing out nozzles gives you a wide variety of angles and water pressure and is easy enough to do. Also, I preferred the separate hose for adding soap which can simply be put into a bucket of water and automatically siphons through a low-pressure nozzle for cleansing the surface you are about to wash. When you are done soaping the surface, simply stick the soap hose into clear water to rinse it out and prevent the permanent clogging that plagued many Task Force users. PROBLEM: The Honda engine was impossible for me to re-start after I had it running about 20 minutes. I finally realized that I had flooded it because I re-opened the choke. The choke should only be used when the engine is cold and started for the first time. The second time I used the Costco Simpson pressure washer, I had no problems and was able to start it up quickly and re-start it with no problems.

While the quality of the Costco Simpson Pressure washer beats the living crap out of the Task Force, I’m not real confident as to how long the machinery pieces will hold-up – only time will tell. I thought that the nozzle where the hose fitting screwed-on seemed a little iffy and am worried that over time, it may strip or lose pressure or leak. The machine is easy to take out and put away an fits in a very nice, tidy, compact spot in the garage. Overall, it’s a big win, win proposition if you want a decent power washer for a decent price. I’ll let you know on the longevity and durability of the Costco Simpson Pressure Washer over time.
[yasr_overall_rating size=”medium”]