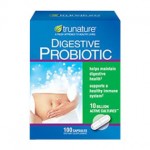 Finally, a probiotic your entire family can actually afford to take once a day. Trunature Digestive Probiotic is sold in 100-Capsule boxes at Costco for just $18.99. That’s only 9 cents a capsule. A box of Trunature probiotics will last a family of four 25 days. $19.00 seems like a reasonable investment to make every 25 days, but do they really work? I’ve rated four or five different probiotics in the last four years, so how does the Trunature probiotic measure-up with the rest? So, let’s compare price and ingredients with my other favorite reviewed probiotics: Reuteri and Sustenex (Now, called Digestive Advantage)

As you can see, when it comes to price, there is no comparison. The Trunature Digestive Probiotic wins hands down. You might also have noticed that by sheer number of active cells, Trunature beats the other two by a mile as well. What we have to remember, though, is that not all Probiotics are created equal – and the number active cultures is not always the best way to measure the probiotic’s effectiveness. Personal experience and user ratings are the best way to measure the effectiveness of probiotics. Some quick research, reveals what probiotic users have to say about all three:
[table “7” not found /]

I most definitely know they do and so do others who use them. I’ve been taking Reuteri and Sustenex for several years. If I ever go off of them for more than a week, I definitely notice an increase in irritable bowel sysmptoms; bloating, gas, diarrhea, constipation, etc..

Digestive Advantage is what used to be called, Sustenex. This is interesting because Digestive Advantage has always had their own product before they took over the Sustenex, name. Neither Sustenex nor Trunature require refrigeration, where-as the Nature’s way Reuteri does. For this reason, I’ve always used both, assuming that refrigerated probiotics might have some benefits that the rest don’t have, despite the claim they don’t require refrigeration. I’ve noticed another thing – Reuteri is far more expensive at my vitamin store. The cost above is for the online price – how can they keep it refrigerated if you buy it online? I wouldn’t take a chance on it. Also, Sustenex was formerly sold at Costco for a low price very similar to Trunature Probiotics. Costco no longer carries it – it appears that the Trunature Digestive Probiotic has taken it’s place. I will continue to use Trunature as my daily, non-refrigerated probiotic supplement.