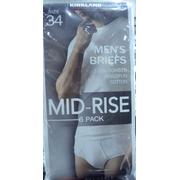 Honestly, I’ve bought underwear that starts falling apart after only the 3rd or 4th time it is washed. Some men’s underwear seems prone to lose its elasticity. While I’ve been known to pack a small ice pack between my back and the elastic, it really is no excuse for it to fall apart so easily. Other underwear seem to hold up fine. It is really annoying when underwear no longer keeps the same shape and fits like it did when it was new and what’s up with all the holes? That’s just plain cheap material. Probably the worst thing at all is when that inside crease no longer stays folded together. Might as well act like Bill Murray and where no underwear at all. With that said, here are the rankings for best mens underwear.

Fruit of the Loom underwear is aptly named. They might as well be made from banana peels. They hold up worse than any other brand of underwear I’ve tried in the last 20 years. It seems as though they were good at one time, but perhaps they started manufacturing them elsewhere (like in China?) to save costs. The Fruit of the Loom brand

are notorious for losing their elasticity. Haynes holds together much better, but the material seems thin and cheap and they develop holes over-time. Good products often prompt me to write articles in order to recommend them. I was so happy with the Kirkland white mens mid-rise underwear from Costco that I had to say something good about them. They are head and shoulders better around your waist than any other pair of mens underwear.