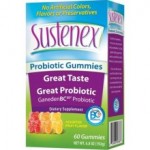 It’s the same probiotic, but this popular brand of probiotics has been renamed. You might still be able to find it in the old familiar packaging, but if not, please look for Digestive Advantage.

I didn’t have to read one, single Sustenex Review before embracing these affordable probiotics as my favorite. While not everyone agrees with me, you’ll be hard pressed to find scientific evidence that Sustenex Ganeden BC30 is not an effective active ingredient for improving digestion and IBS symptoms like diarrhea, bloating and heart burn. You can buy a box of 30 Sustenex Probiotics for under $14.00. This is less than half of what some of the premium brands like, Align, cost. I’ve looked at Align Reviews and they were very impressive, but not enough to make me switch from a probiotic that has been successful for me. I did read one very unfavorable review on Sustenex from a so-called expert that claimed these probiotics couldn’t be any good because they only contain one active culture: Ganeden BC30 Bacillus Coagulans. Each capsule does indeed contain 2 Billion viable cells of Ganeden BC30 Bacillus Coagulans,  but nothing else. Shucks, if that’s all it has, how can it possibly work? I’m no scientific expert but I think someone is paying a little bit too much attention to biology when it comes to probiotic reviews. There is really only one Review that matters: Does it work? Let’s look at the only Review that counts: User Results.

The only Sustenex Review that Matters

Based on 67 Reviews, Sustenex ranked 4.6 out of 5 Stars by Amazon users.  The benefits described were numerous: Relief from bloating, cramping, diarrhea; improved regularity – even a reduction of nausea. A very small number of users reported no benefits at all or didn’t like swallowing the gelatin capsule. The most common drawback reported by Sustenex users is that it has to be taken every single day. This kind of goes along with the next complaint: Sustenex is too expensive. (look at the price comparison with Align below).  Most Sustenex users reported significant benefits in just 2 days with even better results after 1-2 weeks. At least a dozen or so Sustenex users reported that they undoubtedly notice the return of symptoms if they stop taking it for more than 2 days. So, what is it about Sustenex that makes it so effective? 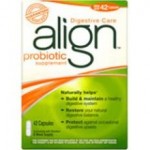 Over 400 users gave rated Align Probiotics 4 out of 5 stars. Obviously, Align has a much larger user base, possibly due to a difference in advertising budgets and technique.  It is normal for user ratings to decline with a higher number of reviews. When compared with other probiotics, however, the price of Sustenex has to be considered a strength. A box of 30 Align costs $23.00 to 29.00 compared to $13-$14 for a box of 30 Capsules. I’ve found Align to be twice expensive as Sustenex at my local Walmart stores.  67 People can’t be wrong – this brand really works, but why is it so effective?

Obviously, the quantity and number of different types of bacterium are important in probiotics, but they are not the only thing that determines efficacy. The way probiotics are delivered is the other mechanism which determines how well they work. Stomach acid or even room temperatures can destroy these friendly bacteria before they get the chance to thrive and colonize inside the digestive system. Ganeden BC30 is a probiotic packed inside of a hardened cell structure or spore and is therefore able to withstand and survive it’s pathway to your intestines. Getting 2 billion of these Bacillus Coagulans to survive on route to your intestines may be only half of the battle, so the Ganeden BC30 is probably why so many people have reported such excellent results with the Digestive Advantage probiotics brand.

Why? Because 2 Billion Bacillus Coagulans inside the patented Ganeden BC30 Pribotic Delivery system can’t be all bad.

The familiar packaging is the same, but the name is different. I am not entirely certain the formula is the same, but if you like Sustenex, you are going to simply have to believe it. It is now called, Digestive Advantage.  According to the package, it still has the popular, Ganeden BC30 formula.

Give us your rating on Digestive Advantage