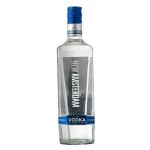 How do you rate New Amsterdam Vodka?  Leave Your Review Below

It’s not because I like Cheap Vodka that I couldn’t wait to try New Amsterdam Vodka. For me, really cheap Vodka is Taaka. There are better vodka brands that are still considered cheap by vodka drinkers, where-as Taaka is considered downright undrinkable by some. So how does New Amsterdam Compare? I thought very highly of New Amsterdam Gin and numerous friends agreed that it is a great gin for the price, so this is one I looked forward to trying and because it is priced about 50% higher than Taaka, I anxiously expected it to be notably better than what I would personally consider a, cheap vodka. So, how does New Amsterdam Stand up to a  cheap vodka and for that matter, a better one?

Ringing out the New Year with New Amsterdam Vodka

To me, tasting Vodka is often like hearing musical notes on a staff. Each flavor has its own pitch. The darker, heavier ones are lower on the staff and the crisper, light and thin ones, are higher up on the staff. I Must say that New Amsterdam is a very high-pitched Vodka. It has a very crisp, thin bite to its nose and rings crisper and more bitter on the very first sip. If this does not sound like a ringing endorsement, it is not a bad one either. New Amsterdam

has an adjustment period where you have to convince yourself that the thin bitter front isn’t going to go down too harshly. This Vodka is not overly harsh going down, but it does have a very shallow, thin bite that burns the top-end of your palate. It is crisp, thin and sweet, yet not much in the way of complexity or character. I believe that some people rate vodka on how little flavor it has. While Taaka is a truly cheap vodka I think it actually has more character and flavor than the New Amsterdam vodka at nearly half the price. I won’t mistake character and complexity for being an un-smooth vodka. I’ve come to appreciate the darker nose; vanilla, butter, rum and caramel in vodkas like Pearl or even the bargain-based bottom end Taaka. If Taaka and Pearl Vodka are a low A, then the New Amsterdam vodka is a high C above the treble-cleff staff. New Amsterdam is tinny, thin and crisp; not overly smooth, but not overly harsh. New Amsterdam doesn’t make a great martini because its front-end is just too darn bitter for sipping. New Amsterdam Vodka, I project, would make a very good mixer with any type of juice or sweetener because it is too light in flavor to overpower anything that you put in it. Cranberry juice would very easily mask its bitter front end. I also think that New Amsterdam Vodka would make a very good Cosmo when used with Leopold Bros Cranberry Liquer.