Last week, I decided that I wanted something a little better than the Apple earbuds that came with my iPhone to listen to music. I made it my goal to find the best headphones under 100 Dollars. Why $100? Well, years ago, I paid right around $100 for a pair of over-the-ear Sony Headphones. Even though they still work, they were collecting dust for a number of years until my son decided he could use them for some of his computer and music programming. Even my son was surprised when I told him I paid $100 for these Sony headphones. He has been planning on getting a good pair of headphones for himself, too. These particular Sony headphones were only average.  Problems? Well, for starters, they had a rather weak bass and a tinny narrow-sounding mid-range and treble. They just didn’t sound live enough. I thought I could do better for under $100 bucks and I was proven right. I bought these headphones before the internet age when I didn’t have the privilege of doing a Google search for the best Headphones under 100. Finally,  I decided to do something about it and find something that would actually improve my music listening experience at home.

The best headphones for under 100 Dollars ended up costing me only $21.59 (nearly only 20% of my projected budget). Now, I can’t say with absolute certainty that there are not better headphones which might cost $70, $80 or $90, but you’d be hard-pressed to find them. I would also venture to guess that there are sets that cost over $100 that don’t sound quite as good as these Monoprice Headphones. The Monoprice Headphones were $21.59 plus about $6.50 for shipping and arrived at my door in two days. 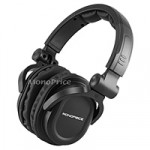 At Monoprice.com, there were 40 ratings from happy music listeners on the 8323 Model Monoprice headphones.  What really pushed me over the top, was a very favorable expert review on the CNET website. The majority opinion on these headphones was that they are astoundingly good for the price. Some users of $100 and $150 headphones went so far to say that the monoprice headphones were actually better. My search for the best headphones over $100 ended quicker and much cheaply than I expected. I bought a pair. I was anxious to see if 40 people could be wrong about the Model # 8323 Monoprice Headphones.

I received the monoprice headphones only two days after ordering them. I was immediately impressed with the two detachable cords that came with the set: One long, thick cord and one short cord. The monoprice headphones seem well-made; are light weight and very comfortably fit over the ears. They do an outstanding job of blocking out surrounding noise. I have a wide variety of music on my iPhone from classical, pop vocals to rock, jazz, soul and some hip hop. These headphones have a very balanced sound. Good, solid, well directed bass; very tight mid-range and crisp highs that don’t get tinny or out of range. These sound great on the iPhone, but even better playing direct WAV Tracks from a CD and external amplifier. The stereo separation from ear to ear is very good. If I have a complaint, it might be that they could use a bit more bass and that the mid-range seems a little too harsh at times. I am being real picky, though – these headphones are a treat and they certainly blow the $100  Sony headphones out of the water. These are the best Cheap Headphones you can buy.  After listening to them for the past couple of days, I have no problem believing others who claim that these $21.59 Monoprice headphones were better than the ones that cost them 5 to 8-times more.