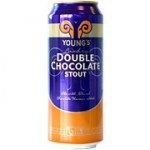 A four pack of Youngs Double Chocolate Stout in the 16.9oz cans found it’s way to my home by mistake. I was at a beer and wine store looking at the dark imported beer when I grabbed a 4-pack of the Youngs Stout, thinking I was getting an unusual variety of Guinness. It is close, but not quite the same. This one is made in England. While the size of the can and familiar rattling of the plastic ball is the same as Guinness, the most notable difference is chocolate. I don’t mind hints of dark chocolate and coffee in my stout beers, but I was a little put off by the label which indicates that chocolate flavor is intentionally added to the brew. I prefer beers where the hints of dark chocolate flavoring comes as a natural result of brewing process and aging in the barrel. See my review on Bourbon Barrel Stout. To be honest, I would not have bought the Youngs had I read the label more carefully and had I known it was only 5.5% alcohol as opposed to the hefty 10.3% alcohol level of premium beers like Bourbon Barrel Stout and Woodcutter # 5 by Odell brewing in Fort Collins. England is a good distance away from Fort Collins, Colorado and so is the taste of this interesting beer.

The pouring and appearance of Youngs Stout is very similar to Guinness and in the way that the foamy head sticks to the inside of your glass. The aroma of Youngs might make you think you’re about to drink a chocolate milk shake from McDonalds. Milk chocolate, more than beer is the first thing I imagined before the beer touched my lips. While the actual taste of Youngs is a bit chocolaty, it really does taste more like a good dark beer than a chocolate milk shake. The Chocolate Stout has a pleasant, smooth and light taste of vanilla, milk and caramel along with a hint of hershey-like instant chocolate flavoring. It is really not bad, especially if you are a milk chocolate lover and don’t mind it being artificially introduced into your beer. Many of the beer snobs online described a lactose taste in this particular creamy stout beer. I would agree with this perception. Overall, it’s a good beer, but is it a hit?

From 1 – 100, I give Youngs Double Chocolate Stout an 84. It is good, overall, but the chocolate flavoring make it a little bit too sweet for me to consider it among my favorites dark beers or preferred next to a black patent malt.