Were Starbucks K Cup Coffee worth the Wait?

…and the extra money? 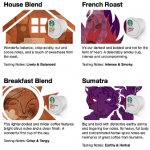 Okay, now that the wait for Starbucks K Cups is over, are they worth all of the hootin’, hollerin’ and mouth-watering anticipation? More, importantly, are Starbucks K Cups worth the extra cost? On average, Starbucks K Cups are 15% more expensive. From Walmart for example, you can expect to pay $13.88 for an 18-Pack of Starbucks vs $11.88 for the other top brands; Emeril’s, Caribou, Newman, etc. I gave Caribou Obsidian, Newman’s Extra Bold and Emeril’s Big Easy Bold all very high marks in previous K Cups Reviews. Since Starbucks is no longer being made in T-Discs, just about anything available in K Cups for the Keurig is superior to the weak and inferior Gevalia which is about all you can find for Tassimo brewers at the store these days. The Tassimo K-Cups, however, were so superior to anything else I’ve tried for the Tassimo brewer that it became my standard for which all other K Cups are measured. Starbucks Columbian in T-Discs remains my very favorite single-brewed cup of coffee. Unfortunately, it is impossible to do an exact comparison of Starbucks T-Discs vs. Starbucks K Cups because they do not make them in Columbian. They do make Verona, however, which was a close second in my opinion, to their Columbian T-Discs. I also think that the Newmans, Emeril’s Big Easy Bold and Caribou Obsidian Black were pretty close runner-ups to my Starbucks Tassimo favorites. Starbucks offers six different blends of coffee for the Keurig Brewer, ranging in light to very dark: Breakfast Blend, House Blend,Verona, Pike Place Roast,Sumatraand French Roast.  As to whether or not any of these Starbucks K Cups are worth the extra cost, it is impossible for me to answer until I’ve had the more time to enjoy them all. There is a couple on the list that I won’t buy because they are either too dark and smoky or too light and acidic. First, I will give you my run down on how all of these K Cups Taste and below that a table which describes their tasting notes and a preliminary rating from 1-100.

I’ll confess that I have never tried this coffee because French Roast is simply too burnt, smoky and dark for me. I’ve already tried Starbucks French Roast in the bag and I’m sure this one is no better. The problem with coffees that are this dark is that they taste weak. Too much smoke and not enough coffee flavor.

This was the first box of Starbucks K Cups I tried. I found it to be a little too light and acidic for my tastes. This one is similar to Donut Shop Coffee by Coffee People. In fact, it is not distinguished enough that it is worth the extra 15% cost. I’d go with the Donut Shop Coffee if this is the kind of coffee you like: Good, perhaps great for those who like a lighter, more acidic roast, but not my cup of tea – err, Coffee.

This one is billed by Starbucks as being lively and balanced and I think they couldn’t have described it more accurately. I would describe the taste as being somewhat between the Donut Shop and Newman in boldness. It has some acid to it, still, which is okay if you like a lighter coffee. I can get used to this. Not bad. I think it is much better than Breakfast Blend or French Roast and I may even prefer it to some of my other favorites due to the so-called “liveliness”.

The Starbucks Sumatra K Cups might be confused with French Roast to some because it is intensely dark. Starbucks advertises this one as herby and earthy, but I would describe it more as a bit rubbery and a little over-roasted. I’ve bought StarbucksSumatrabagged coffee before and have never been too impressed with it. I’ve had other brands ofSumatrathat are better and more aptly fit the description of herby and earthy. This one needs to be a tad lighter in my opinion.

This is a very good coffee and easily competes with the best I’ve had. This one could become my favorite or runner up after having some more time to get familiar with it. I believe I still have a Tassimo T-Disc ofVeronaat home. I will do a side by side comparison and let you know how similar it is. Starbucks calls this one dark cocoa and roasty sweet. I kind of think it may be just a tad too sweet and in need of a bit more roasted cocoa, but we’re nitpicking here.Veronais one of my favorites.

There is a reason that Pike Roast has become the regular coffee choice at Starbucks stores – it is just an all around great coffee – very balanced and non-offensive to a wide variety of tastes. It is described by Starbucks as Smooth and Balanced and both of those adjectives are very accurate descriptions. I think the Pike Roast might be the one I prefer the most out of all 6 Starbucks K Cups choices, but only because it is that I will get the least tired of drinking. If there is a problem with it, it could be that it is just a wee bit boring. There is nothing very distinguished or unique about the taste of Pike Roast, but it is smooth, bold and rich enough to keep you from getting tired of it. That is why it has become the Starbucks favorite.

Summary of K Cups by Starbucks

There is not a bad k cups variety in the bunch – it’s a matter of what you like and are used to drinking. I haven’t decided ifVeronaor Pike Roast is as good as what I can get over the counter of an actual Starbucks store, but it is close enough to keep me wondering for a while. I am also undecided as to whether or not I would continue to pay more for Starbucks K Cups over my other favorite three coffees: Emeril’s Big Easy Bold, Caribou Obsidian Black and Newman’s Extra Bold. I have a hunch that over time, Cafe Verona and Pike Roast will become my two favorites of them all.