What are Shake Weights? 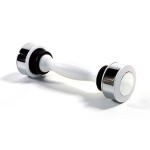 You have probably noticed these Dumbell-looking exercise devices called Shake Weights near the check out stands of your local department stores. I became curious as to what they actually are supposed to do as opposed to your typical, boring set of 10lb, 20lb or 30lb dumbbells. Shake Weights are basically dumbbells with a pulsating motor in them. The inertia of the motor inside the dumbbell is designed to give you better upper body strength and tone through the physics of Dynamic Inertia. That is what the makers of them claim, anyway. The motor doesn’t actually run electronically. You activate by simply doing what the name of the product implies: shaking. Typically, the product package includes one shake weight dumbbell along with an exercise video and sells for about $20.00. That might not seem complicated, but like any popular fad, I’ve noticed a number of different sizes, colors and flavors; as well as a package for men and a different package for women.

What is the Difference between Shake Weights for Men and Women?

Size and weight are what distinguishes the men’s weights from the women’s. The women’s dumbbell is 2,.8lbs and the dimensions are 12.2 x 3.3 x 3.3 inches in size. The men’s weight is 5.8lbs and is 15 x 5.3 x 5 inches in size. Of course, the men and women’s shake weights are interchangeable depending on your strength, size and needs. Perhaps a better question is, do these motorized dumbbells really work?

The advertisement on the box suggests you can improve your muscle, body tone and upper torso strength in just 6 minutes per day. Of course, the results will vary based on how often and how long the shake weights are actually used. To answer whether or not Shake Weights really work as claimed, I scanned over 300 Amazon reviews: That’s 180 for women and around 120 for men. Surprisingly, the mens reviews were rated a little higher. Men gave the product an overall rating of 4 stars. Women rated it just over three stars. Perhaps the reason for the slightly higher rating in men is because some women complained of shoulder pain and other neck and shoulder-related injuries from the exercises they performed. Nearly half of both men and women gave the product a 5-star rating and said they were very pleased with the results in getting flabby, weakening arms looking and feeling toned and strong again. Some users who were less than satisfied claimed that they could get just as good results shaking a partially filled bottle of water. I find it hard to believe that a bottle of water would be as ergonomic; easy to hold and use. For $20.00 the convenience size and exercise DVD make it a no brainer for anyone wishing to find ways of strengthening their arms and feeling better about themselves without going to a gym. Based on the total sum of Shake Weight Reviews,  the product does seem to provide benefits for most of the people who use them or they wouldn’t continue to be such a big seller and average 4 star ratings between men and women.