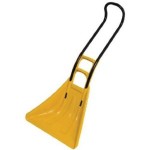 Since first seeing the Snoboss shovel at Home Depot last year, I decided to look up some actual user reviews on this large, peculiar-looking snow shovel. My large driveway requires a lot of horizontal and vertical distances to cover with a standard shovel, so I’ve often wondered if there is a better way. The Snoboss (Snowboss or Snow Boss) is a drastically looking looking different tool than the typical, snow shovels I’m used to. While my other two snow shovels are ergonomically designed, they do not have the deep, double-hand scoop of the snoboss. In theory, the snoboss makes the job of shoveling a driver quicker and easier on the back. What specifically is different about the features and physical properties of the Snoboss that supposedly make it superior for shoveling snow?

The snoboss is described as an Ames True-Temper Snow pusher. A quick glance at the snoboss will tell you that it is better suited for pushing larger volumes of snow. Hopefully, this means you don’t have to cover as much distance, going back and forth to do the job. Additionally the snoboss is ergonomically designed in such a way to minimize lifting and strain on the back. The double u-shaped, handle gives users a dual grip for dispersing the weight of the snow when lifting and pushing. If that’s not enough to push through heavy snow, the snoboss also includes a ledge for

using your feet. Why would I be interested in a big shovel like this? Well, because the current shovel I use (See Picture to the left) is incapable of paving across the width of my driveway without leaving behind streaks of snow on both sides of the shovel. So, even a relatively light snow storm of say 4-6″ means that for every path I pave, I have to make two trips back and forth to pickup the leftover snow. My hope is that the Snoboss is big enough and holds enough volume in snow that I can make a spotless path from one side of the driveway to the other. This looks and sounds great in theory, but before I plop down $38.00 on a snow shovel, what are people actually saying about the Snoboss shovel? Does it do a good job and can I find one review that proves the Snoboss will accomplish the task of being able to shovel a spotless paved path across the width of a large driveway?

Over 34 users of the Snoboss rated it 4 stars on Amazon and another 9 ranked it 4 stars from Home Depot. A 4-Star rating out of 43 users is not bad, but what could keep this product from getting 5 stars? For one, thing there seems to be a number of users disappointed in the bottom blade edge of the snoboss, citing that the metal was soft, poorly made and didn’t stay flat against the pressure of the snow. Well, okay, not a deal killer, but how about making a clean sweep across my driveway without leaving streaks of on both sides of the path? Well, apparently, the snoboss isn’t perfect in that respect either. A small number of users reported that while the snoboss does much better than a standard shovel in this regard, there is still some spillage over the sides when going across the driveway. The other small gripe is that the snoboss shovel is a little bit cumbersome for maneuvering corners. So, what about the positives? Nearly all users of the snoboss unanimously agreed that it makes the job of cleaning the driveway much easier and quicker than your standard snow shovel. Everyone also agreed that this shovel is far easier on the back and makes the job much less straining. Even those, who didn’t rate the Snoboss with a perfect 5-star rating, admitted that they preferred it to their typical snow shovel.

Pros and Cons of the Snoboss

The Snoboss is not the perfect snow shovel, but I have yet to find one that is. If you live in an area where you can expect more than a handful of rough, snowy days, why not arm yourself with all the help you can get? The fact that the snowboss will help minimize back pain is reason enough alone to buy one. The benefits of getting the job done quicker are merely the icing on the cake – or should we say the snow off the driveway? We’re expecting 5-8 inches of snow tomorrow morning, I wish I had already bought a snoboss shovel