, you’re not alone. I got tired of paying $4.00 for a tiny bottle of wasp attractant serum for each of my yellow jacket traps. I have a fairly wide back-yard which gets swarmed with wasps in the late summer/early fall. At $16.00 a pop for four, it gets expensive and they don’t last all that long. Pictured left, are the yellow jacket traps I use at home. The other question I had: Is the Wasp Recipe I’m buying the best I can do? I quickly found out an answer to my question.

In Search of a Better Wasp Attractant

Uncontrolled observational studies at home may not be the most scientific method for discovering new and better ways to improve your backyard environment, but they can be very effective as I shall explain: The four yellow jacket traps I have cover a width of my about 50 yards of my backyard. I noticed that the wasps, particularly the ones swarming around the table on my deck were not being particularly excited about the Yellow jacket traps. After 24 hours, only about 12 wasps found the traps appealing enough to make their way inside. There were easily at least 50 wasps flying around the surrounding area. That is, until my wife put out the humming bird feeder. If you think hummingbird nectar makes a good attractant for hummingbirds, you should see what it does for wasps or yellow jackets. In a matter of 5 minutes, dozens of  yellow jacket wasps clung to the hummingbird feeder like flies on cow dung. It was a remarkable site. Even more remarkable was how quickly they began emptying the feeder of its red, hummingbird nectar contents. Hummingbirds and Wasps have the same tastes, the only difference is that the wasps are much more aggressive and persistent about going after it – and they don’t mind or care whether or not a human being gets in their way. So, it was with great skill and courage that I removed the yellow jacket traps from around the humming bird feeders and brought them into the house for a dousing of my new-found wasp formula.

A picture speaks a thousand words: The Wasp Trap pictures on the left is after 1-Day of use with the hummingbird nectar. The wasp trap on the right is your typical Wasp Serum that comes with the pictures yellow jacket traps and this is after 5 days of use.  Also, worth noting: 2 days after this picture was taken, the hummingbird nectar continued to attract more wasps and as of the time of this writing, is still getting new wasps. The one on the right, with the store bought brand of wasp trap recipe is being completely ignored after just 7 days. By the comparison photo, is there any doubt which one is the best wasp trap recipe? 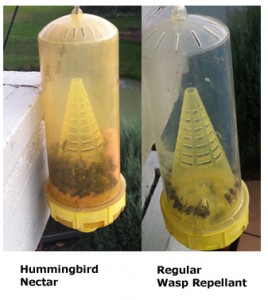