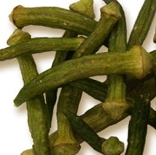 Dehydrated Okra by Davis Lewis Orchards is almost as tasty as it is fun to eat. My appreciation of Veggie Straws comes to mind. Other okra brands are often sliced into coin sized bites. This takes a great deal of fun out of the snack and defeats the purpose of dehydrated okra in my opinion.

The fun and mystique of this very peculiar snack stems from the fact that it retains it’s shape and size after the Okra is dehydrated. Only the texture of the vegetable is changed. (Or is it a fruit?) Whatever it is, Davis Lewis orchards do a masterful job of preserving the snack in the deyhdrating process so it retains it’s original form and shape after it’s dried. What does change is what every okra hater will appreciate about dehydrated okra over the real thing. Davis Lewis Orchards takes a stringy, slimy vegetable and transforms it into a perfectly preserved crispy, light, hollow, tasty snack. The oil on the outside gives the dehydrated okra a shiny, appetizing appearance. Okay, one thing to note, here: You know you like a snack when you keep opening up the bag to grab another bite. That’s how good this stuff is. However, the dehydrated okra probably doesn’t taste quite as delicious as it could. Let’s talk about why.

How Dehydrated Okra Could be Better

If only Davis Lewis Orchards had chosen another type of oil instead of Canola, I’d give their snack a supreme rating. As I’ve described in other, healthy snack reviews, canola oil makes things taste a tad fishy or like oil paints. Peanut oil, sunflower oil or palm oil would all be much tastier choices for these types of snacks, not to mention, healthier. Don’t let my aversion to canola oil dissuade you from this light, crispy snack. Understand this: I am not an okra lover, but the texture of Davis Lewis Orchard’s dehydrated version of this peculiar vegetable makes all the difference in the world. You owe it to yourself to give it a try.