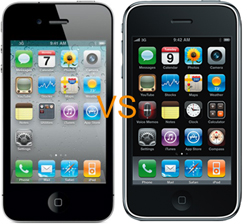 Is it worth the upgrade from a iPhone 3GS to a 4?

Are you an iPhone 3GS user wondering if it’s worth it to upgrade to the iPhone 4? I was asking myself that same question about 3 months ago. I made the switch for only one good reason: I wanted my wife to have an iPhone. When I purchased an iPhone for the first time, it opened up an entire new world for me. It seems the iPhone 3GS was in my hands at all times. I use it for checking email, analyzing website stats, facebooking, twittering and other website social marketing. The applications – even the free ones, are truly remarkable. My iPhone 3GS was only 8 months old when I began reading the new iPhone 4 reviews. Knowing how much my wife would enjoy staying in touch with friends on Facebook and email with an iPhone, I thought it was a great opportunity to upgrade. So, I renewed my wife’s 2 year contract with AT&T; bought the iPhone 4 32GB Version and gave her my 3GS.It is not my intention to deploy a full iPhone 4 review, here: There are hundreds of those online that do it better than I can. What I really want to do is compare the two iPhones for those considering the iPhone 4 vs iPhone 3GS.  Also, I’ll give my impression of the iPhone 4 vs Droid.

If you just bought an iPhone 3GS in the past 12 months, don’t feel too pressured to upgrade to the iPhone 4 right away. With the new iPhone 4.2 OS my wife can do most of the same things on her iPhone 3GS that I can do on my iPhone 4. The icons and interface on the 3GS work the very same way. I’ve noticed absolutely no difference in network (regardless of the Wireless N WiFI) or speed of operation and despite claims of a longer battery life, my 3GS seemed to do better than the new iPhone 4. While the new iPhone is a little sleeker and thinner than the iPhone 3GS, by the time you put a jacket on it, it looks and feels roughly the same. The iPhone 4 seems more square in my hands, where-as the iPhone 3GS feels more rounded. But enough of the similarities. By now you’re thinking, why should I waste my money on an iPhone 4? Well, to me, there are four really huge advantages to the 4 over the 3GS. These aren’t the only advancements of the iPhone 4, but these are the ones that make the most difference to me. These are the four new things about the iPhone 4that I think most of us will notice, get the most use of and learn to love.

Worthwhile Differences of an iPhone 4 Upgrade

Underwhelming Benefits of the iPhone 4 vs iPhone 3GS

Some Not so Good reasons to Upgrade to the iPhone 4?

In my opinion, any of the four features above make the iPhone 4 a worthwhile upgrade. There are, however, some other technological advancements which I don’t notice enough to appreciate the difference of the iPhone 4 vs iPhone 3GS.

If you’re in the market for a Smart Phone, you probably know something about the Droid. My opinion is that anyone who’s had two weeks to get their hands on a Droid and Apple iPhone 4 will learn to love either one. I’m partial to Apple products for their intuitive, easy-to-use interface. The iPhone just feels right in practically every way imaginable. The Droid’s resolution is not as high as the new iPhone 4. Both phones will shoot high definition video and take pretty good photos, though the Droid has an 8MP camera as opposed to the iPhone 4’s 5MP. When my friend showed me his new Droid, I had a few minutes to mess around on the touch screen and navigate the menus and functions. It didn’t have the interface or wow factor that my iPhone 3GS did the first time I used it. Anti iPhone people love the Droid because it’s not an Apple product and they’ll tell you how much better and more powerful it is. For what it’s worth, PCWorld did a very full features review on both phones, and gave the edge to the iPhone 4. It is also worth noting that the iPhone has nearly 250,000 apps compared to just 75,000 for the Droid. On average, iPhone Applications cost less money because the phone has been around for developers to program so much longer. The iPhone 4 has been around much longer than the Droid and it looks the part as it is much more refined, in my humble opinion. For Apple users, the iPhone 4 vs iPhone 3GS is the most important question.