Were you actually looking for a Digital to Analog TV Converter Box or a DTV box or Digital Converter Box? If you still have one or more analog televisions in your home and you wish to use them after February 17th, 2009, you will need to buy a Digital to Analog Television Converter Box. Some tend to reverse the terminology by calling these Analog to Digital Converters rather than the other way around, or you may refer to them simply as a DTV Box, or digital converter box.  Whichever way you name them, their purpose is to allow you to continue watching the new digital television transmissions on your old analog television. So, analog to digital, digital to analog … how much do these babies cost, and which DTV Box or digital converter box should I buy?

DTV.GOV has useful information and links to coupons for how to acquire these DTV boxes. Typically, they cost around $50.00 – $60.00. The good news is that every U.S household can receive two $40.00 coupons from the U.S government at the website below: DTV.GOV
Analog to Digital Website So, basically, you can expect to pay no more than $10.00 or $20.00 for each television, as long as you use them to purchase one of the listed models on their site. You can also call them at: 1-888-DTV-2009. The other way is to request one from your Cable or Satellite TV provider. 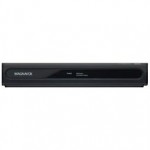 There are other, more expensive DTV Boxes with a better television menu system and other advanced features. However, after doing a little research, I’ve discovered that there are really no substantial benefits or reasons to pay more than $50.00 for a box which will be used on an older, analog television. One of the more popular ones seems to be the Zenith DTT900. It is actually a nice looking box and quite a bit better looking than the old analog one given to me by my cable provider, Comcast.

Analog televisions normally use a 4:3 viewing ratio. The DTT900 will support a wide screen views if you do happen to have a digital TV, but this box is mostly intended to make use of a 4×3 analogy TV. There are four viewing Formats that you can set:
Set By Program, Letterbox, Cropped and Squeeze.

The menu system seemed adequate and easy to use, though I would prefer larger buttons for the numbers on the remote, which is a little too small for my personal tastes. The DTT900 includes 2 RF-style F connectors. One for input and one for output. It also includes one set of standard RCA outputs.

Due to digital processing, there is a noticeable improvement in picture quality, even on an analog television. The important thing, however, is that the DTT900 provides an inexpensive way to continue using your favorite analog television, allowing you to wait for digital television prices to continue dropping through the floor. For the official FCC website regarding DTV Converters: DTV.GOV